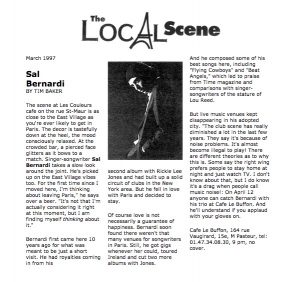 It was 1974, I was spending most of the time bouncing between Quebec City, Jersey and San Francisco.

At this time, I was in S.F., a beautiful city. But nothing much doing in the way of any active music scene.

One of the advantages of the city was a charitable Welfare system, which I had become a temporary member of, along with many other down and out gigless bohemiens in town. Which, by the way, was probably half the city’s population at this time. I had often heard that LA was a musical hotspot. I had never been there and didn’t know a soul, but I was desperate. So I took my next Welfare check and jumped a late night flight.

Ended up in downtown LA at about 1:00 am. I developed an immediate disdain for the place, one that exists ’til this day. No reflection on the locals, in fact, some of my dearest friends are there. But for me, it’s a purgatory, and I’ve found that one of the greater sensations is walking past the departure sign at LAX airport.

But back on this rainy night in ‘ 74, the 1st arrival, with $80 in pocket, I got on a bus that would bring me to Hollywood and Vine. Checked into an old hotel that cost $5.00 per night. The place was inhabited by hookers, queens, alcoholics and characters up in age, who had come to Hollywood many years before to seek a place in show biz but never quite made it. Instead, crapped out, wandering around this old hotel lobby, like figures in a wax museum. One guy done up like David Niven in smoking jacket, dickey, pencil thin mustache, and cigarette holder. He hardly spoke.

Another guy was like a Henny Youngman, always in a suite, carrying an umbrella, reciting one liner after one liner, none of them remotely funny.

One day on seeing him outside the hotel, I thought I might cheer him up by telling him a joke. He got really angry and said “You’ll never make it! You know why? You’re not serious!”

There were several characters like this. All very sad and bitter. Surreal and done in by their dream quest. Not very inspirational for a young upstart.

My 1st day in LA was spent at the Welfare Dept., trying to finagle some temporary funding so I could get myself landed. I figured in S. F. it was easily attainable so therefore, LA being in the same state, it would be just as easily done. Which wasn’t the case.

They put me on a work detail, 3 days a week. 7:00 am cleaning up hospital parking lots. We’d get on the bus, me and a bus load of ex-convicts, and tour the hospital lots of East L.A. until 5:00 PM.

There was always a high spirit on the bus. Most of them just out of jail. I guess it was like being on a class trip to them.

Another Welfare requirement was to look for a job. They’d issue a paper, on this paper, you were to bring back 10 signatures of the people who had asked for work and rejected.

I was stationed at a shop called “Nero’s Nook” downtown by the bus station. An extremely seedy area. I was given the night shift. It wasn’t too bad, because there was no one looking over my shoulder giving orders, I ran the place.

A definite rise from the chain gang gig.

There was a small theater in the back room. I’d run the films and pocket half the cash. I was issued a billy club to ward off ruckus customers. There was never a need in the whole month I was there, as everyone behaved like perfect gentlemen. It was dirty work that apparently somebody’s got to do.

But where was all the music that I’d been promised? I was told that Venice Beach is where all the hippies meet and that there was a band down there that may be looking for a guitarist.

I made the long haul down to Venice by bus to find this gig possibility. They were playing at a place called “The Comeback Inn.” That particular gig didn’t pan out, but while hanging out, I picked up another gig, playing for a female comedy duo called “The Shnozetts,” or something like that. It wasn’t what I had hoped for but it was something.

We’d play at The Comeback Inn on weekends. They would do the same routine for basically the same crowd every week. One night, the audience became hostile. Booing and cat calling and so forth. At the end of the night, the owner of the place, a health fanatic from Germany, told the girls that they can continue to work there providing they got rid of the piano player, which they did.

There was a front yard to the place where people would hang out. That’s where I remember meeting Rickie. She reminded me of a young Dinah Shore somehow. Perception, like love and time, is a peculiar phantom. She said the German didn’t like her either.

At one point, she began to sing Funny Valentine in a way I’ve never heard anything sung before. A wailing cry at the “stay Funny Valentine, stay” part. I recall a light rain falling, her voice bouncing off the rooftops like a siren over Venice.

I hung around LA for a few months, occasionally running into Rickie. Before leaving, I left a number of some friends up in SF that would usually know of my whereabouts.

About 4 years had passed, back in Jersey. One day I was over at my friend and musical partner, Joey Vernazza’s place. We were working on some songs for a band we had.

We’d play mostly originals, but for some odd reason on this day, Funny Valentine dropped in from out of the blue. Which was strange being that we never played ballads.

It brought to mind the time in LA, and I began telling Joey about the girl who resembles Dinah Shore and how she wailed that song with such a flare.

When I got back home, I turned on the radio and on comes Funny Valentine. I hadn’t heard the song since that night in LA and vaguely remember hearing it prior, and now, twice in one day.

Then the phone rings. “Hi, it’s Rickie, remember me?”

The next year she came to New York, had just recorded the 1st record. We were listening to the tape when I hear, “Sal was working at Nero’s Nook.” So much for trying to make a discreet dollar.

The word weasel wasn’t too flattering, but I felt it redeemed by the word “cool.” And “Say Good-bye to the Bario.”

Being from an Italian neighborhood in Jersey, I had no idea what a bario was, but let us not quibble over poetic license. Actually there was another Sal from that neighborhood who truly was a notorious, bonafide weasel, who ended up dead over it. Something to do with hot diamonds, as story had it. In that town, weasels were frowned upon with vengeance.

Personally, I’ve always kept a clean nose as far as any weasel shenanigans go, aspiring to be of stand up character only. “I swear, I’m innocent.”

Anyway, a year had passed and I was back in Frisco. Rickie had come up from LA to visit, but lost my number. She had some time to kill before catching the flight back to LA, so she stopped into a bar in North Beach. This one on Grant St. with swinging doors like in days of old West. In fact, it was an old Saloon.

I was living way on the other side of town, but for no real reason, I decided to make it down to North Beach, and for the same reason, walked into the swinging doors bar. Ordered a drink at the bar, felt a tap on my shoulder, I turned and, surprise!! There she was looking like a beatnik leprechaun. “Out of all the gin mills in the world,” or at least San Francisco. Incredible odds.

A few years ago here in Paris, on Bastille Day, I was coming home from a late gig, running into a guy from the neighborhood, by the name of Abdul. We decided to have a nightcap at a little outside cafe.

The sun was starting to show and the last of the Bastille Day bash were staggering home. I began telling him the Funny Valentine story. Abdul didn’t seem to buy it. In fact he appeared to be a little disheartened that I may have been insulting his intelligence by way of trying to hand him a tall tale.

The expression on his face changed from disbelief to disbelief, when a song came on the radio from inside the cafe.

It was Funny Valentine.