Listen to this ZappaCast! Reissue of Nigey’s 2005 album via Muffin Records.

We haven’t been keeping up with news for months, but decided to fire up the old Mizar engine for the following we spotted on a Facebook friend’s wall (thanks, Jun Kumagai!). You all know we love to read what’s written about Steely Dan and its founders, but if a journalist misinterprets or twists facts to sensationalize in order to try and earn some readership wings, that is a big NO NO in our book! So yeah, click on the image for the rest of this article, and how a Rolling Stone journalist now will never ever get on the good side of mr. Donald Fagen.

But wait! There’s more! Scroll on for the rest of this story. A link to the Rolling Stone article can be found Down In The Bottom, to add Walter Becker to this mix (up). 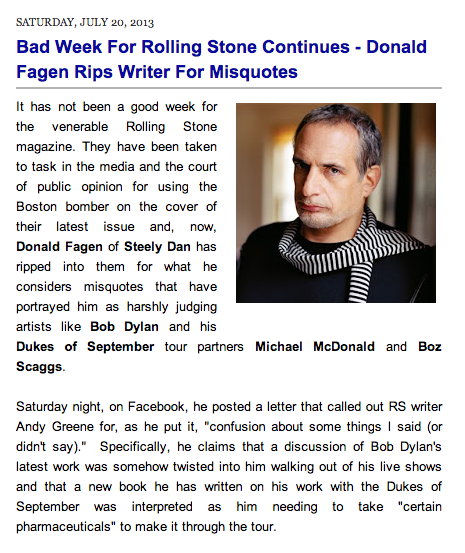 We googled the Donald-Fagen-blasts-boring-Dylan-McDonald-Scaggs Donald Fagen refers to in his post, and found a bundle of other websites covering this as hot gossip, they’re all using the same snippets. 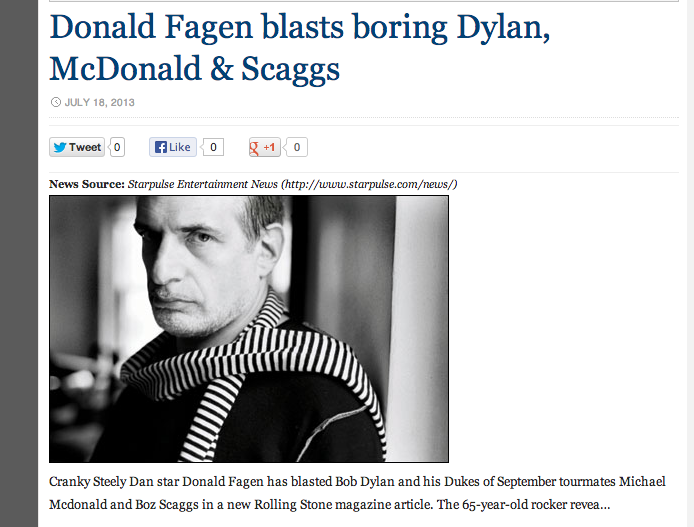 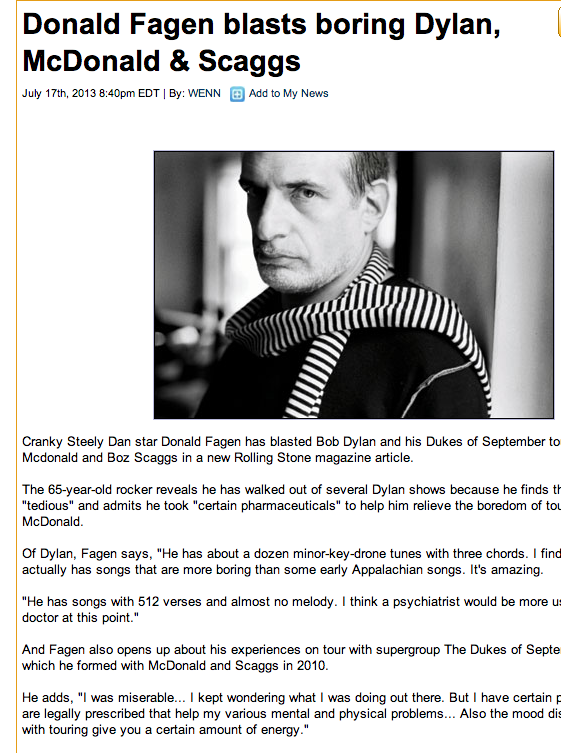 We took a look at the comments on the Donald Fagen Facebook page (he posted a newer version of his initial response that is posted in Vintage Vinyl News we refer to if you click the first image) and picked a fine selection to show you here: 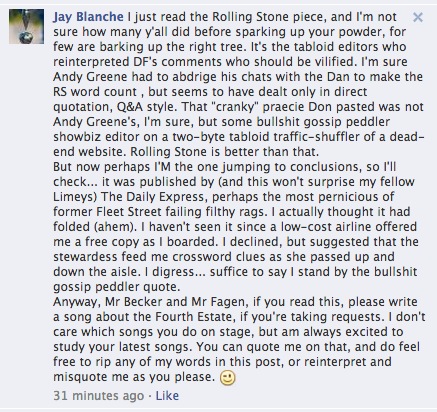 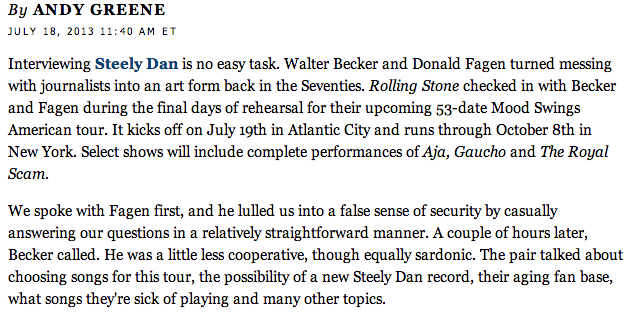 First, wishing all who end up here by chance or on purpose a Happy Healthy 2013.

You might want to hear some news about Walter Becker, we can’t oblige in that department alas. Mizar6 host Rumpus is on Facebook all the time following various music pages and his colleague Bud’s into deep contemplation away on some roof in Shangri-La.

So what we can offer you for the moment, is news that involves Donald Fagen as a producer. It might surprise you, though. Ever heard of Oh Whitney?

You will now. If you’re curious how they all met, just follow this link. 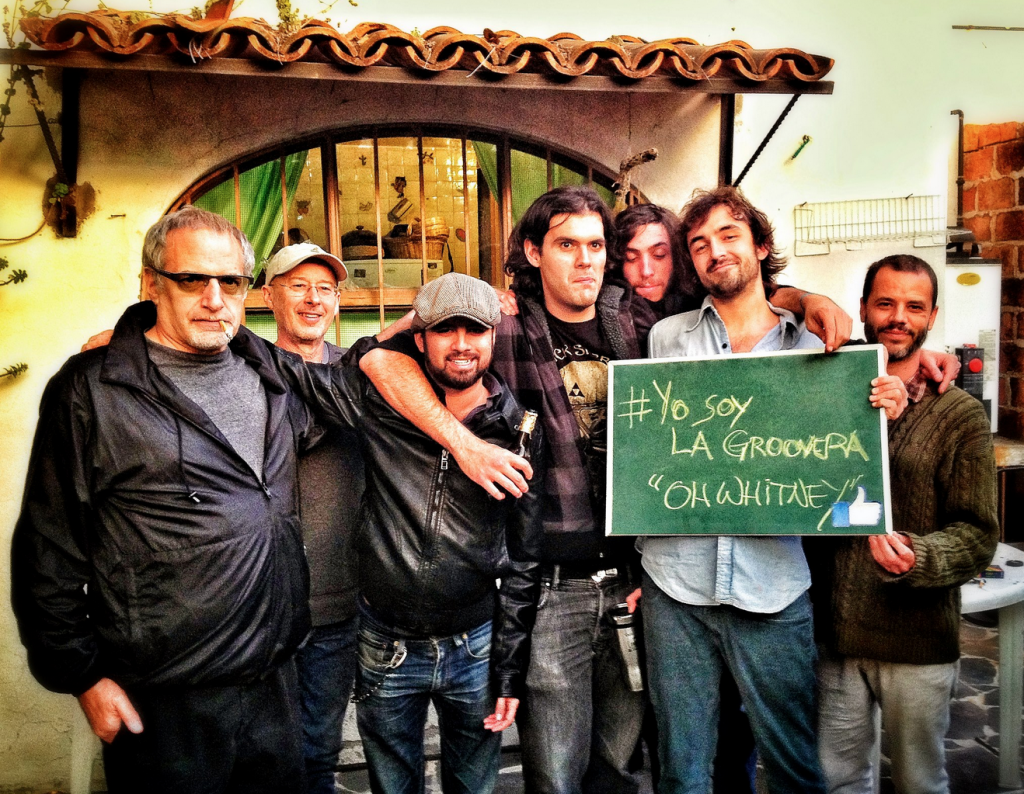 Donald Fagen’s new album Sunken Condos is on the rise. The first single is released and available via the usual outlets. Click the album pic for a stream on Rolling Stone magazine, if you want to check out the rest, click here. We have been out of the loop for many months. Got reeled back in the second we heard a familiar sound, and after listening to it time after time after time for as long as the insomnia permitted, we could only reach this one conclusion:

Mizar6 embraces this tune and the optimism it brings! And more later this week, because Rickie Lee Jones also has a new album out, available now everywhere for purchase, a wonderful collection of classic compositions by Neil Young, Levon Helm, The Rolling Stones… go check it out, you won’t be disappointed: “The Devil You Know”.

This requires a little bit of info. The past four days, Maastricht celebrated the 20th edition of JekerJazz, a musical fest in the heart of the city with cafes, pubs, lounges and small diners offering free music to their audiences. I got involved a couple of months ago and helped Giel Coenen and Appie Weijers with some PR and promotional activities: Using social media and networks like Facebook, Twitter and the incomparable WordPress blogconcept to spread the word. On Saturday we had a few things going on in which i was highly involved. A homage for Glenn Corneille, the musician who sadly passed away due to a tragic car accident in 2005, started with music in the old bell tower of the City Hall. Kenneth Tan, a very good photographer made some real nice pictures and if you click his name, you get a pretty good idea of what it was like up there.

We spent the afternoon in bar lounge Cabane, watching a DVD of Corneille’s latest concert with his Corneille Roelofs Trio in the company of his parents and their friends. It was a heartwarming experience with some moving moments, especially for Glenn’s parents. Even though it was a DVD, after each song played by the Trio, the audience in Cabane applauded just like the people on the DVD did. As if it was a genuine live concert. It sure sounded like one.

So, for the evening there was a lot to choose from and we left it to where chance might lead us. I got wind of some groovy sounds and when i went into the Falstaff cafe, i couldn’t have been more surprised. So many bands were programmed i really didn’t keep track of who was in what band and such. And there he was, Roger Corneille. Yes. he’s Glenn’s cousin. My entire day was a Corneille one it seemed, and not a bad day to spend it in the company of Corneilles. For the musical talents sure weren’t limited to Glenn, who really was one of a kind in the way he mastered his instrument. But his cousin Roger has something to call his own as well!

And it wouldn’t be real Mizar6-ish, or Mizar5-ish if there wasn’t a Steely Dan connection somewhere along the way. So we’re going to see who’s in this truly funky groovy Funk’d from Venlo, a small southern town northwest in the province of Limburg: Duncan Tilmans (drumz), Werner van Gool (keys), Charles Coppens (bass), Roger Corneille (vocals) and Berland Rours on guitar. And it’s this Berland guy who is our Steely connection. Besides being a real good player as you can easily assess when having seen the clip above, he’s also on drummer Ron van Stratum’s latest album: Swingin’ In The Swamp. 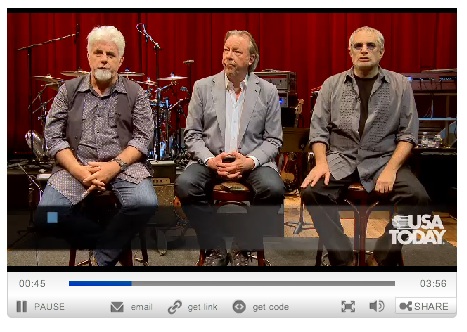 NEW YORK — Separately, the Dukes of September have sold tens of millions of albums, explored every major strain of popular music and commanded attention over four decades.

United, they are promising to deliver a unique concert bonanza for Boomers and connoisseurs of R&B and soul.

Tonight in Danbury, Conn., Boz Scaggs, Donald Fagen and Michael McDonald play the first of 22 Rhythm Revue dates during which they’ll try to justify the regal, doo-wopish title they’ve bestowed upon themselves. It shouldn’t be hard, as they offer up nuggets from their own careers, alongside tunes from jukebox heaven and the Americana attic. Tour stops include Boston (Aug. 31), Chicago (Sept. 11), Los Angeles (Sept. 29) and a finale in Las Vegas (Oct. 2).

The mind can play tricks when you least expect it. The universe can do the same, for those so inclined to read between the stardust (vulcano dust?) and moonlight. A friend once brought up the concept of the inner jukebox, music you hear in your mind, a fascinating phenomenon in its own right, how we’re able to “hear” and “see” in our mind.

The inner jukebox had me play Married, Broke or Gay, a song from the Fabulous Breithaupt Brothers songbook this morning, sung by Shelley McPherson who is also married to Jeff Breithaupt. It’s a very humorful tune with humorful lyrics. Shelley sings “He’s married, broke and gay. He scored a hattrick when he married Patrick”.

It’s the hattrick idea that kept lingering. Everything Must Go.

A few weeks ago I received an email from Chris Bell, a writer in New Zealand. We once found one of his short stories, The Boom On Mizar-5, that matched perfectly with our own modest circulation on the internet back then. Chris wrote to let me know he was going to stop writing stories and that his latest story would be available for free and if I would want to notify anyone among friends and foes who’d be interested in reading his work.

CHRIS BELL was born in North Wales in 1960. He studied going-slowly-all-the-way-around-the-outside in the playground of Old Park Primary School, Holyhead, which was later demolished to make room for an Unemployment Benefit Office. One of his secondary school reports read: “This boy shows no interest in music.” He has since worked as a musician, record company runner and a song lyricist, and since 1997 has been living and working in Auckland, New Zealand. His hobbies include baby-wrangling; tinkering with a bass guitar plugged into a Korg ToneWorks Pandora PX4D; drinking single malt whisky; and irregular blogging. He gave up ironing but nobody noticed.

The Bumper Book of Lies is his only collection of short stories and this is a very old photograph. 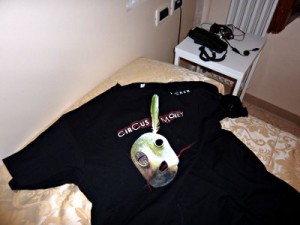 Read all about it on the Radio Dupree blog…

George Duke himself says the following about this album: “This was my first solo album for an American Record Company. Dick Bock wanted me to record some current pop material. We chose Laura Nyro, Judy Collins, and Paul McCartney. On the album were my buddies John Heard bass and Dick Berk on drums. I met Jay Graydon (guitar) while working with The Don Ellis Big Band, and liked his playing a lot. Of course he went on to become a great producer. The horn section consisted of Ernie Watts sax & flute, Jay Daversa and Charles Findley trumpets, Ernie Tack and Glenn Ferris trombone. I also met Glenn while I worked with Don Ellis. The album is an eclectic mix of Jazz Funk using pop material, with some straight ahead tunes thrown in. The LP was recorded, I believe, during the Spring of 1970 while I was touring with Frank Zappa. His influence is certainly felt in this album.” 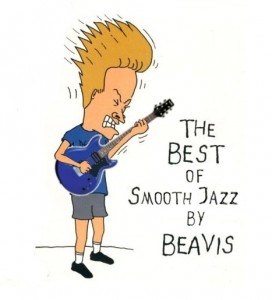 Jeff Wilks sees revenue potential in talk that didn’t come his way with jazz. T-R-I told you last Wednesday that the “Truth” stunting on Wilks Broadcasting-owned KJZN was the real thing, and that the three-year-old jazz station would go talk on Friday. It all came to pass, and the lineup is something out of TRN exec Phil Boyce’s dream – he’s got players in almost every position.

Here’s the rundown – Mancow, 6-9am. Laura Ingraham, 9am-noon. Jerry Doyle, noon-3, Michael Savage, joining for 3-6pm (more about that in a second). Rusty Humphries, 6-9pm. Curtis Sliwa, 9pm-midnight – he’s the only non-TRN personality, from the station Boyce used to program, WABC. Then TRN’s Phil Hendrie, midnight-3am. And the new Washington Times show once it debuts in June, 3-6am.

The only situation that was a little hairy was Michael Savage, who’s been getting a delayed clearance from Peak’s KMJ-FM, 7-10pm. Now his syndicator TRN can clear him live on The Truth, when he’s contractually available in mid-June. One consultant predicted last year that smooth jazz would be the first format casualty of the Arbitron PPM, because of its reliance on Time Spent Listening. But in the past three days it’s lost three outposts in several non-PPM markets, starting with Fresno and then New Mexico and Ohio –

With apologies, i won’t be attending this “smooth jazz” funeral but allow me a moment to reflect and rant. i’ve always disliked the “smooth jazz” term. it’s not because of the artists or the music itself. moving into this arena has allowed many fine musicians to be heard by the masses and thus launch their careers by touring and selling cd’s. i have many in my collection.

i realise it is standard operating procedure for product marketers, but what bugs me is the insidious marketing tactic of using a legitimate term such as jazz to simply lure consumers. “smooth jazz” ain’t the real thing, baby. some, if not much of the material that makes up the “smooth jazz” sound would not get even get close to the doors of jazz haunts like the blue note or the vanguard. that doesn’t mean the artists don’t have the chops to enter those hallowed grounds. I respect them. they are legit and would cut it in those rooms. to make matters worse, “smooth jazz” radio stations often throw in some R&B (there’s that label thing again) tracks into the mix that make no sense even to their “smooth jazz” commitment. marvin gaye is “smooth jazz”?

jazz is a valuable treasure that requires musical curators. the players that have made the commitment to be curators of jazz do it for the love and conservation of the genre, and it is their funerals i would sadly attend.