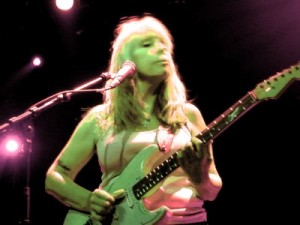 She suddenly appeared from the dark and the audience, not prepared for a quiet entrance, applauded surprised or not at all. Not everyone realized Rickie had entered the stage already. So she made a remark about it with a wry sense of humor and introduced herself again. “Here is Rickie Lee Jones,” while the audience cheered much louder and Rickie’s face lit up with a smile, in the center of a spotlight.

She sat behind the grand piano, the chords of Living It Up filled the room. Sal Bernardi and Rob Wasserman had joined RLJ on stage, awaiting their cues to step in. Most of the time she took the journey on her own, only allowing subtle input from her two musicians. And there was smoke and light effects. She liked the lights, but not the smoke. “It’s killing me, this smoke, it makes it hard for me to sing. If you don’t cut it, I’m gonna walk off stage,” she said with a clear warning to the guys who handled the effects.

And she got up alright. But didn’t walk off. Instead she smiled and said she’d try the guitar first and come back to the piano later on. The audience just held its breath. And as soon as Rickie started to play the guitar and sing, all was well again.

Remembering setlists and the order of the songs she played is not my thing, alas. There were no seats, so we all had to stand, the front row kind of leaned against the stage. Being that close, you just look at the performers, Rickie in particular, and follow her every move. Reel it all in.

Danny’s All Star Joint, Running From Mercy… songs from her new album Balm In Gilead… her voice still sounds the same after so many years, even the high notes have remained within her reach. Her technique and savvy as in how to use the microphone was just as interesting to watch, given the dynamics of her range and volume and the way she interprets her music.

There’s a huge difference in Rickie behind the piano and Rickie at the guitar. If she’s playing the piano, you can feel her strength and wide artistic palet as she plays the chords we’re all so familiar with, especially the songs we know from Pirates, her second album. If she’s at the guitar, she seems to tone down some and become more of a singer-songwriter, like one in the legion of many, albeit outstanding ones. Or maybe it’s just my own preference…

I bought Balm In Gilead at the show and even though I’d already listened to it via the player at spinner.com, the tracks have most definitely gained body now that I’ve seen her perform live. The magic of Rickie Lee Jones is still there. She still taps into my soul, feed it with the same kind of energy and thrill she did when I was barely 16…