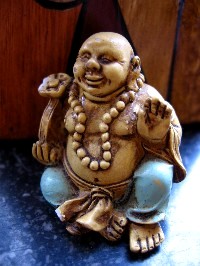 It’s been more than a while! Bud was supposed to share his favorite albums on a monthly basis, but somehow his intention got lost in a cybermaze. There really is no valid excuse but the fact that he was on a journey, barefoot. And whilst traveling, he discovered so much in the world he didn’t know about yet, he needed all his spare time to think all of those discoveries through and give them in place in his mind and heart.

But we have good news for you! As one of his traveling companions, he brought this very fine album by Chicago pianoman John Erickson, ‘Contemplation,’ released in 2000. Listening to this music guided Bud through many difficult moments and especially blister hell, so to celebrate the album’s 10th anniversary, Bud would like to offer you a humble review of this must own CD. There are still a few copies left via CD Baby, so don’t linger and order this rare gem! And before Bud’s gonna spill some of his own magic beans, here’s an excerpt from a M5 Interview with John Erickson: 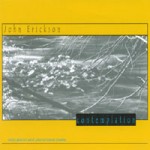 M5: Your first CD, Contemplation was released by Astarte Records, an independent label founded by acclaimed singer-songwriter Joy Eden Harrison. The CD has four piano/bass duets with Steve Rodby, known as being the bassist/producer for the Pat Metheny Group. How did the two of you meet and what was it like to work with him on your debut album?

JE: I was working at a record store soon after I got to Chicago and Steve wandered in one night with his wife. I said “hello”, told him how The Pat Metheny Group is one of my favorite bands, but more importantly that one of my all-time favorite albums is a duo record that he (Steve) did with guitarist Ross Traut. “Which one?” he asked. I said “You mean there’s more than one???!!!” I was speaking of “The Duo Life”, but apparently they also did one called “The Great Lawn”. It was out of print by then, but a few days later I went in to work and found that Steve had dropped off a copy for me that he had laying around in his garage–still in it’s longbox! ( remember those? ) Anyway, when it came time to record, I e- mailed him to see if he’d be willing to play on a few tracks. I figured he’d be too busy, but I guess my timing was good. He’s a super nice guy, great to work with. My only regret is that it was over too quickly. He showed up, read my charts and played beautifully. It was so very inspiring and I just really love his sound. One of the songs “The Universe and Dave”, I wrote with Steve in mind. It’s built around a simple 2 bar vamp that I thought might be fun for him to play on bass. He improvised an intro that felt so good and was so much fun to listen to I had to work really hard to keep from laughing out loud while tape was rolling.