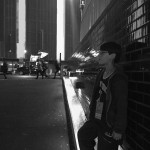 Last year we received an email from a proud father who figured his son Own would be eligible for a Mizar6 mention. He deserved more than just a mention. Owen York is 12 years old now, but was a lot younger when he started to play Steely Dan tunes ‘from the heart’, as in, figuring out the chords and all that fuzz by himself. And it wasn’t just Steely Dan, but also Umphrey’s McGee, Miles Davis, Chick Corea, Phish, Peter Gabriel and many others.

Umphrey’s McGee and Owen are good buddies by now, he got to hang out with them at a soundcheck last year. And the latest is this performance in Madison Square Garden. Yes. Your eyes are not faltering! Owen played at halftime during a Knicks game in March. Appropriately, he decided for a David Bowie song, Ziggy Stardust.

Father Harlan let us know that Owen’s not into multiple web appearances, auditions or a website of his own (apart from the YouTube channel), but prefers a regular childhood with the emphasis on getting good grades at school, playing soccer and golf with friends.