Nigey passed away Monday, November 14 due to complications from radiation therapy she received in 1998. She survived the cancer, but not the treatment. She thought she was fighting a virus, but instead she was fighting a battle she couldn’t win.

Like a lot of creative people who choose the artists’ path, our friend Nigey and her husband Eric depleted their resources during the course of her 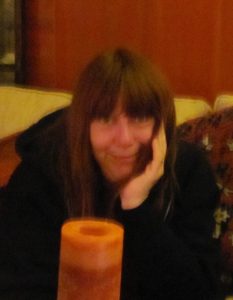 illness.With this fundraiser we aim to cover the expenses for a funeral. Please do what you can and share to get the word out.

It’s her wish to be buried at Northport Rural Cemetery. In a bio-degradable cardboard coffin. She didn’t want to be cremated. Maybe she liked the idea of becoming part of the soil, the land she cared for.

Can you, as her friends, make that wish come true?
The goal amount is provided by the Northport Rural Cemetery.
All donations will solely be used for Nigey’s funeral.

Paypal however, takes a fee for each donation via the fundraiser page. https://www.youcaring.com/nigeylennon-694718

If you’re in the USA and have a PayPal account, you can also send donations to me directly via https://www.paypal.me/GinaVodegel, and PayPal won’t take a fee. Every dollar will be for Nigey’s plot at Northport Rural Cemetery!!

If you’re in Europe, you can also send donations via https://www.paypal.me/GinaVodegel as my friend, that way no fees will be charged. I will keep you posted of each donation made, of course, via email and in updates with screenshots/pictures on the fundraiser page.

Nigey is known as a published author. She wrote “Sagebrush Bohemian,” the first book about Mark Twain in the West, Homeopathic Cell Salt Remedies (co-author Lionel Rolfe), “Being Frank,” her time spent with Frank Zappa, “Bread & Hyacinths” (co-author Lionel Rolfe) which illuminates an obscure chapter in the history of Los Angeles and America’s socialist movement, and a popular book about the Grandmaster of Pataphysics, Alfred Jarry, “The Man with the Axe” which was extensively illustrated by Bill Griffith, a famous underground comics artist who has had a daily strip (Zippy the Pinhead) for decades.

Her skills as a musician and composer resonate on her album Reinventing the Wheel which was first released in 2001. A remastered version with bonus tracks is in orbit since 2013. Providing these bits and pieces of her resume, however, don’t do justice to who she was as a person and a human being. Her wit and intuitive sense for the peripheral perspective in life gained her an inner encyclopedia of knowledge, a stealth mode that made her invisible and unknown to others, yet she saw and noticed a lot, if not all. Her return to the cosmic collective consciousness is a deep loss for those who love her.